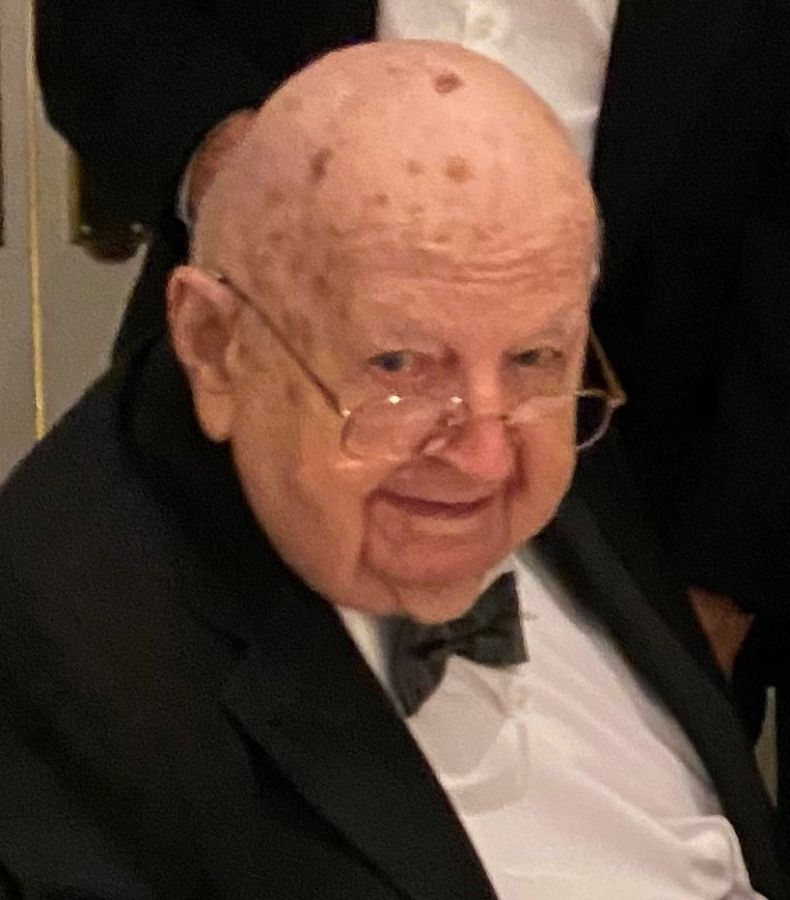 Marvin Gilbert Barish lived an extraordinary life, filled with an unbridled love of family, his Jewish faith, and the State of Israel. He enjoyed a great run which came to an end at the age of 95 early on July 5, 2022, thankfully with little discomfort, and with his son David by his side.

Marvin was born in Dallas, Texas, on June 23, 1927, to Ruth and Joe Barish (Z"L), immigrants from small villages in what is now Belarus. He welcomed his sister Doris (Z"L) into the family in 1931. They enjoyed growing up in the tightly knit Jewish community of South Dallas. Their home life was typical of the time with Ruth always cooking and Joe always working. He was a fruit peddler, and Marvin would help out in the business during his teenage years. He excelled as a student in both public and Hebrew school. As a teenager, he tutored the bar mitzvah boys at his shul. He was chosen to attend Boys State during his junior year of high school. He graduated second in his class in January 1944, and enrolled in SMU in the spring of that year. He attempted to enlist in the Army after turning 18 in 1945 but was rejected due to flat feet. He was then accepted into the Navy's Aviation Cadet program, and continued his classes at SMU while waiting for a slot to open up in the program. The war ended while he was still waiting. He was given a choice for an honorable discharge or continuing to wait. He accepted the honorable discharge and carried his discharge card with him in his wallet the rest of his life.

Marvin pursued his education in accounting at SMU. He had to suspend his classes to work, and did so with a number of accountants in Dallas, while also helping his dad in his produce business. In 1948, he joined his best friend Sam Rudy on a blind date in Houston. They drove to Houston where he met Shirley Fenberg (Z"L). After that first date, they corresponded regularly. Shirley came down with appendicitis so Marvin traveled to Houston on the train to be with her at the hospital. He proposed at the hospital and they were married on January 16, 1949. Shirley's parents were founding members of Congregation Emanu El in Houston, and Rabbi Robert I. Kahn officiated at their wedding. They welcomed Jackie as their first child in 1950, followed by David in 1952 and Leon in 1953. Marvin worked with Nolen's Jewelry for many years with Shirley's brothers. In 1973, he decided it was time to venture into something different. With Doris' husband Sol, he acquired a two store outdoor furniture business in Houston. Jackie helped run one of the stores. Several years later, David was enlisted to help grow the business. Chair King Backyard Stores, and beginning in 2009, Fortunoff Backyard Stores, became the largest outdoor furniture retailer in the country with fifty stores in Texas and the northeast.

While almost always working to support his family, Marvin was also committed to giving back to his community and supporting his faith and synagogue. He and Shirley became temple youth group advisors as soon as their children became of age to participate. Shirley created the idea of Houston Yom Limmud, was the founding chair and eventually they both endowed the program to ensure its perpetual continuation. They also gave generously to Congregation Emanu El. After the unexpected passing of Shirley in 2011, Marvin created the Shirley Barish Memorial Israel Experience to send high school students at Emanu El to Israel free of any expense. He recently endowed the program for its perpetual continuation. Most recently, Marvin endowed the Marvin Barish Early Childhood Endowment Fund which enabled the Houston Jewish Federation to create the Marvin Barish Right Start Program to help qualifying families enroll their first child into a Houston Jewish early childhood program.

While being an astute businessman and incredibly generous, Marvin was so much more. He was always a student of Torah, attending Torah study every week for years, and becoming a bar mitzvah for a second time when he turned 83. He was an accomplished artist. He was an excellent poker player. He was a first-rate chess player. He loved telling risqué jokes. He enjoyed the opera and classical music. And of course, he enjoyed fine dining and treating his family to the same on countless occasions.

Marvin is survived by his loving children, Jackie Barish, David Barish and Linda Jayaram, Leon Barish and Terry McGinty, grandchildren, Joseph Weisman, Michelle Weisman and KC Collins, Krish Jayaram, Priya Jayaram and Joel Geddis, Leah Barish and David Kaphan, and Rachel Barish, and eight great grandchildren. He is also survived by Doris's husband Sol Freed, nephews Bill Freed (and Cheryl Kaufman), Steven Fenberg (and Harry DeJonge), and Jay Fenberg (and Carol Fenberg). Marvin was blessed to be able to stay at home until the end with the love and support from his caregivers, Delicia Frank, Shirley Frank, Ashton Frank, Addie Sims, Kendra Mouton, and Sheila Conway. The family is eternally grateful to all of them for enabling Marvin to enjoy his last few years at home.

A service will be held at Congregation Emanu El, 1500 Sunset Blvd, Houston, Texas, on Thursday, July 7, at 10:00 am, followed by graveside services for family and friends. For those wishing to view the funeral via Live Stream please use the following link: https://www.emanuelhouston.org/watch/barish-sanctuary/

Donations in memory of Marvin can be directed to the Shirley Barish Memorial Israel Experience Endowment Fund at Congregation Emanu El, or the Marvin Barish Early Childhood Endowment Fund at the Houston Jewish Federation.

Plant a tree in memory of Marvin

For a life very well lived! From all of us at DSA- Andy, Steven, Blake, Leslie, and Hilary

Memorial Tree was purchased for the family of Marvin Gilbert Barish by Andy Hamilton.

The attached photos are added to the memorial of Marvin Gilbert Barish to help share their legacy.