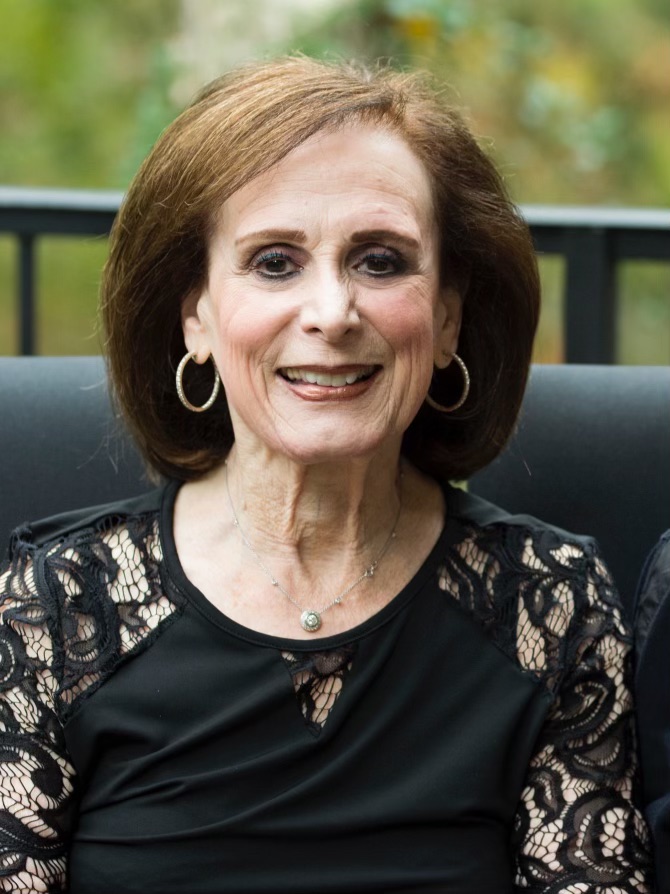 Evelyn Pauly Roth, 80, passed away peacefully surrounded by family on Saturday, June 4, 2022 in Houston, Texas. Evelyn was born on February 2, 1942 to the late Erna and Hans Pauly. As the middle child and only girl, with older brother Fred and younger brother Allen, Evelyn's inner and outer beauty radiated from the very beginning. Her smile and sparkling eyes were enough to light up a room and her kindness was legendary. Growing up in the Riverside neighborhood, Evelyn hosted frequent sleepovers with friends who became lifelong confidants, took numerous trips to Galveston and enjoyed Sunday night dinners with extended family. Her parents, German immigrants, founded Blue Ribbon Packing Company and filled their home with love, appreciation for their heritage and plenty of meat.

One fateful evening, her brother Fred was hosting a B'nai B'rith Youth Organization meeting at their home when one of the new members named Franklin spotted Evelyn across the room and instantly fell in love. At the time, she was blissfully unaware that at the age of 13, she was looking into the eyes of her b'sheret (soulmate).

By high school, Evelyn was excelling in school-enough to skip half a grade to graduate from San Jacinto High School in 1959 with her devoted boyfriend, Franklin and their friends. But shortly thereafter, she was headed to Miami for college and Franklin to the University of Texas. Lucky for everyone, they both returned to Houston where their love grew stronger and wedding bells rang in the summer of 1962. The next 65 years together would be filled with love, family, faith, friendships and incredible travels.

Shortly after their first anniversary, they welcomed baby Michelle, and Evelyn's life shifted from devoted daughter and wife to adoring mother. With the help of their parents, they quickly learned the art of parenthood and enjoyed watching their sweet girl thrive. Two and a half years later, Evelyn gave birth to her first son Rodney, who resembled her father with his red hair, and eight years later, their family was complete with the arrival of baby Jason. Evelyn was a natural, always encouraging her children's interests and providing help along the way. Her kitchen pantry was epic and widely known throughout the neighborhood as always being filled with the best snacks and sodas. She had an open-door policy and truly never met a stranger. Nothing made her happier than having a house buzzing with family and friends.

And while motherhood kept Evelyn busy, she still found time to develop a series of businesses with her sister-in-law Barbara. From making sandwiches to hand-crafted jewelry to invitations, their entrepreneurial spirit was remarkable. After 40+ years of partnership, The Paper Connection ceased taking orders this past year. During that time, they proudly helped multiple generations of families prepare for their simchas with their special blend of humor, compassion and excitement.

One constant in Evelyn's life has been her love of numbers and games. Whether she was playing in a weekly poker game with friends, completing the sudoku puzzle in the daily newspaper or throwing dice at a craps table, Evelyn loved a good game of strategy. Evelyn was known to bluff, but above all she reveled in this time spent with friends. A highlight was her 50th birthday where Franklin surprised Evelyn by organizing a party in Vegas with 30+ family members and friends. Franklin and Evelyn loved to celebrate each other, their family and friends-never missing an opportunity to honor a milestone occasion.

Evelyn was also community minded and held leadership roles including two terms as Sisterhood Co-President at Congregation Emanu El. Her nature was to give, whether it be of her time, counsel, energy or resources to family, friends and the local community.

Weekends and vacations would find Evelyn and Franklin traveling the world with their growing family or spending downtime in Galveston with close friends. She was very appreciative of the blessed life she lived and did not take these special moments for granted.

Evelyn found true joy being with her loving family. Watching her three wonderful children find their life's passions and their own b'sherets, was the greatest gift for both her and Franklin. Evelyn became a grandmother before the age of 50 and chose to be called Mimi in this new and exciting role. She quickly realized that being a Mimi meant having fun with her grandkids without all of the worry, stress and disciplining that comes with being a parent. Evelyn and Franklin reveled in their new-found status-hosting Hayley, Blake, Gavin and Cameron for sleepovers, trips to Disney World, family cruises and loads of time after school and on the weekends. And when baby Ellie arrived in 2012, Mimi and Granddad traveled to Maryland every 6 weeks to spend time with their sweet Elle Belle and her parents. Evelyn had a way of making everyone feel special, safe and loved while also bringing the fun.

While Evelyn and Franklin shared a fairy tale life and love story, the last chapter in their lives was quite challenging. In his later years, Franklin developed dementia which would eventually rob him of his ability to communicate and take care of himself. Without skipping a beat, Evelyn became the coordinator of his care ensuring his ability to remain safely at home during his illness. Her loving kindness and precise management of every aspect of his wellbeing was incredible to behold and served as a meaningful example to her children and grandchildren of the power of love and devotion. And when her daughter Michelle developed cancer, Evelyn was a continuous support. She and Franklin attended Michelle's appointments, when able, alongside Michelle's husband Barry, often fitting the four of them in a small exam room. She was ever-present for friends and family during the best and most challenging of times-always providing a listening ear, words of encouragement, a hug or kiss.

In this full circle moment of life, we are honored to reflect on Evelyn's dazzling, magnetic and loving persona, and we find solace in knowing that this bright light in all of our lives has joined with her beloved to shine upon us for eternity. Each of us holds a bit of her sparkle in our hearts forever.

Evelyn was preceded in death by her beloved Franklin, her daughter Michelle Glauben, her parents, her parents-in-law Mabel and Isadore Roth, and her brother Fred Pauly. She is survived by her son Rodney and wife Robin, son Jason and wife Lynnie, son-in-law Barry Glauben, grandchildren Hayley Glauben and fiancé Mitchell Robbins, Blake Glauben, Gavin, Cameron and Ellie Roth, brother Allen Pauly and wife Barbara, and many nieces, nephews and cousins.

The family extends its utmost appreciation to Dr. Robert Wolff and his team and Dr. Benjamin Musher for their loving dedication to Evelyn's wellbeing.

Contributions may be made to the MD Anderson Cancer Center, Congregation Emanu El or the charity of your choice.

To plant a beautiful memorial tree in memory of Evelyn Roth, please visit our Tribute Store

Plant a tree in memory of Evelyn

Plant a Tree
16 trees planted in memory of Evelyn Roth

Please accept our most heartfelt sympathies for your loss... Our thoughts are with you and your family during this difficult time. 3 trees were planted in memory of Evelyn Roth Plant a Tree

You are in my thoughts. 3 trees were planted in memory of Evelyn Roth Plant a Tree

May the spirit of Evelyn Roth continue to live and thrive on Gods beautiful earth through these very special trees. 3 trees were planted in memory of Evelyn Roth Plant a Tree

Although we never met you, we are lucky to hear about you and grateful to know your family. Hope this tree will bring peace and growth to our Earth.

Memorial Tree was purchased for the family of Evelyn Roth by The Kalra Family.

In memory of Evelyn Roth!! Fran and Norman Ochstein

Memorial Tree was purchased for the family of Evelyn Roth by Tribute Store.

Dearest Roth Family,
We are heartbroken to hear of your loss. Though we have lost touch over the past few years, the respect and love for your family has never waned. We are Blessed to have known such an incredible and generous woman. You are all in our prayers as you navigate your way through the days ahead. Out deepest condolences.
Kenneth and Sherel Thomas

Sending our love and condolences to the Roth family.

Memorial Tree was purchased for the family of Evelyn Roth by The Lavaches.

With loving memories of Evelyn Roth,

Y Your friends in the Petitions and Policy offices on Jun 7, 2022

Memorial Tree was purchased for the family of Evelyn Roth by Your friends in the Petitions and Policy offices.

We send love and support to the Roth and Glauben families. It was a great pleasure to know Franklin and Evelyn. Very deep sympathies, the Kelleys

Memorial Tree was purchased for the family of Evelyn Roth by Kelley family.

My memories of Evelyn are of a loving thoughtful friend. She had a wonderful way of seeing the world. And was an amazing and loyal friend to lucky enough to know her. I am forever grateful she crossed my path. And we had some fun times together. She will be missed. Judy Weiss

Please accept my most heartfelt sympathies for your loss. My thoughts are with your family during this difficult time.

Memorial Tree was purchased for the family of Evelyn Roth by Montia Pressey. 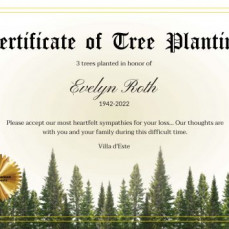 The attached photos are added to the memorial of Evelyn Roth to help share their legacy.

Please help memorize Evelyn Roth by recording your attendance below.