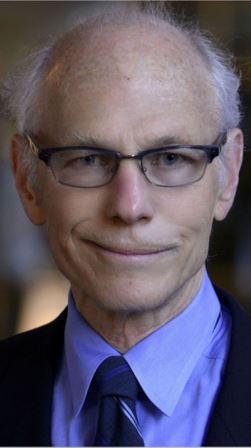 He was born on December 12, 1946 in New York City to Nathan and Mary Levin. A graduate of the City College of New York, he earned a doctorate in psychology at the University of Iowa under the tutelage of Arthur Benton, PhD and completed his internship in psychology at the Illinois Masonic Medical Center in Chicago.

Harvey joined the faculty at the University of Texas Medical Branch in Galveston where he began an internationally renowned career in clinical work, teaching, and, most of all, pioneering research on brain injury. He also held positions at Baylor College of Medicine with a joint appointment at the Michael E. DeBakey Veterans Affairs Medical Center.

During his career, Professor Levin authored and co-authored more than 300 articles in scientific journals and numerous books that advanced knowledge of and treatments for traumatic brain injury (TBI), epilepsy, and other illnesses that affect brain functioning. He received many prestigious awards, including the American Congress of Rehabilitation Gold Key Award and Distinguished Lifetime Contribution to Neuropsychology Award from the National Academy of Neuropsychology.

In 1995, Professor Levin established the Cognitive Neuroscience Laboratory (CNL) at Baylor College of Medicine's Neurosensory Center, which was supported by federal grants, including National Institutes of Health, Department of Defense, the Department of Veterans Affairs, and the Centers for Disease Control and Prevention. The CNL integrates rehabilitation and neuroplasticity research with multimodality brain imaging, cognitive psychology, and neuropsychology. CNL focuses on multidisciplinary traumatic brain injury research involving adult and pediatric populations and has pursued both observational studies and clinical trials. Other areas of research have included sports-related concussion and TBI sustained by veterans in combat.

Harvey's zest and enthusiasm for life were contagious. He biked, swam and was an avid runner. He was passionate about music, fine art, health foods, and culture. His most cherished memories include traveling the world, combining his teaching and research engagements while absorbing historical, cultural, and culinary offerings from Turkey to Tuscany.
Harvey spoke French and was enamored with French culture, which was evident in passion for cooking that flourished in the latter third of his life. Harvey also studied wine and classical music, collecting an impressive library of recordings. He immersed himself in Houston's rich performing arts scene, including the Houston Symphony, Houston Ballet, Da Camera Society, Houston Early Music, Houston Grand Opera, and Opera in the Heights.

Harvey is survived by his son Marc and his partner of 15 years, Ruth Buryakovsky. He was married to Ellen M. Levin, PhD from 1967 to 1996. He is also survived by his brother Arthur Levin, PhD,, his sister Patty Levin and nephew Alexander Setzepfandt, and cousins with whom he was close, Elaine Apter, Felice Apter and Judy Carson.

Donations can be made to the Brain Injury Association of America and World Jewish Relief Ukraine Crisis Appeal.

To plant a beautiful memorial tree in memory of Harvey Levin, please visit our Tribute Store

Plant a tree in memory of Harvey

Plant a Tree
21 trees planted in memory of Harvey Levin

Harvey was a great teacher, scientist and mentor for all of us in the Neurotrauma community. May the Lord bless Harvey's family. 3 trees were planted in memory of Harvey Levin Plant a Tree

Peace, Prayers and Blessings. 3 trees were planted in memory of Harvey Levin Plant a Tree

With heartfelt condolences, 3 trees were planted in memory of Harvey Levin Plant a Tree

Harvey was a delight and always willing to spend a few minutes chatting when encountered on the UTMB or BCM campuses. He was a wealth of knowledge and had interesting insights about various cases. He will be greatly missed in the neuroscience community. My condolences. Anne Anderson, MD

Dr. Levin was a gentle giant whose presence here on earth will surely be missed. I had the pleasure of working with him in the PM&R department from 2001 to 2007. Many have benefited from his contributions to our society and he leaves a rich legacy that will forever be cherished.

Our research group began its work in the field of early brain injury over 30 years ago, inspired by the important and innovative research of Dr. Harvey Levin and his team. Harvey was a pioneer in his field, with his earliest work still relevant decades on, his ongoing work always cutting edge, and his impact on the lives of brain-injured children immeasurable. His many students and mentees are now spread across the globe. We are ever grateful for Harvey’s leadership and his contribution to knowledge generation regarding underlying mechanisms, risk factors and pathways to recovery following childhood brain injury.

Over and above his professional contributions, Harvey was extraordinarily generous with his skills and knowledge, and his precious time. He was always happy to mark a thesis, write a testimonial or review a paper, with his input fair and constructive. He was even willing to brave the arduous, 24-hour flight to Melbourne, to contribute to our work, which was a major highlight for our group.

Harvey will be sorely missed by his colleagues as a significant leader and role model in his field, but also as cherished friend. We send our condolences to his family in this sad time.

Please accept my heartfelt condolences. "May his memory be for a blessing"
~Kimberly Sarden

Memorial Tree was purchased for the family of Harvey Levin by Brooke Rollins.

I have so many great memories of our times together and with your family! My prayers go out to Ellen and Marc.

Memorial Tree was purchased for the family of Harvey Levin by Tribute Store.

My heartfelt condolences for your loss. As he did with so many, Harvey influenced my life professionally and touched my heart personally.

Memorial Tree was purchased for the family of Harvey Levin by Bella Iovino.

I will always remember how kind and supportive Harvey was when I moved to Houston. He will be missed. My sincere condolences.

Memorial Tree was purchased for the family of Harvey Levin by Daniele Zoch.

I first met Harvey in the early 1980's as a postdoctoral fellow at Medical College of Virginia working on the Coma Data Bank Project along with Jeff Barth and Ron Ruff. t. I learned a huge amount from reading Harvey's many publications and collaborating with him. He was a genius, a brilliant man. Unquestionably, a great mentor. He will be missed and fondly remembered. Jeff Kreutzer

My sincere condolences for your loss. Harvey was a one in a million person in so many ways. He was a dear and respected mentor, friend, colleague, and a quintessential academician.He was one of the biggest names in the field of neuropsychology, and his contributions to mankind's understanding of traumatic brain injury are unparalleled. His work has impacted countless lives directly & indirectly through his research, mentoring, and by serving as a role model for us all. I will miss seeing him at professional meetings, where he was always the smartest person in the room, yet at the same time the most humble and always upbeat and delightful. The world is a better place for having him in it, and his legacy will live forever.
Munro Cullum, PhD, ABPP

Harvey was a giant in the field of neuropsychology and touched countless lives through his work. He will be missed but his legacy will live forever.

Memorial Tree was purchased for the family of Harvey Levin by Munro Cullum.

I first worked with Harvey in 2011 and I was immediately impressed with ability to clearly communicate science and willingness to share his time and expertise. Over the years I would see Harvey in meetings, and he always willing to share a smile and chat. He will be missed, but his legacy will endure.

Every time when Dr. Levin visits the imaging lab, he always brings me a gentle smile and support/encouragement in my work. Dr. Levin's life is really

Memorial Tree was purchased for the family of Harvey Levin by Xiaodi Lin.

I worked with Dr. Levin for 13 years as a statistician. He was the person whom I felt respected statisticians the most. He encouraged me, trusted me and honored me! He always acted like a friend, a father and a mentor. I can still recall all of the memories that I shared with him, discussing the results of statistical analyses, tweaking papers, and reviewing grant proposals. I will never forget his significance in my life.

I will never forget Dr. Levin's significance in my life.

Memorial Tree was purchased for the family of Harvey Levin by Xiaoqi Li.

Memorial Tree was purchased for the family of Harvey Levin by Linda Courtney.

Memorial Tree was purchased for the family of Harvey Levin by Lisa and Amir Ansari.

Harvey was a significant influence on my life and career. He has made an impact on the lives and careers of many of us and in this way will live on.

Memorial Tree was purchased for the family of Harvey Levin by Mark C. Wilde.

As he was for so many others Harvey was an important mentor and a good friend. He will be sorely missed.

Harvey was a good friend and mentor throughout my career. He will be sorely missed.

Memorial Tree was purchased for the family of Harvey Levin by Josh Breier.

Harvey was a gentle giant professionally and personally. I studied his work throughout my 30+ year career. When I moved to Houston in 2012 Harvey was there welcoming me and encouraging me, We would have bagels and coffee often. In fact, he would bring us "special" bagels from his favorite place and reminisce about NYC bagels being the best in the world. The field of neuropsychology owes Dr. Levin so much for his advancement of TBI research and knowledge and the countless number of students and individuals he has mentored along the way. Harvey is a true mensch professionally and personally.

I was honored to get to work with Dr. Levin on a grant while I was a fellow at another institution. He was brilliant and inspiring! Thinking of you.

Memorial Tree was purchased for the family of Harvey Levin by Tribute Store.

The attached photos are added to the memorial of Harvey Levin to help share their legacy.

Please help memorize Harvey Levin by recording your attendance below.