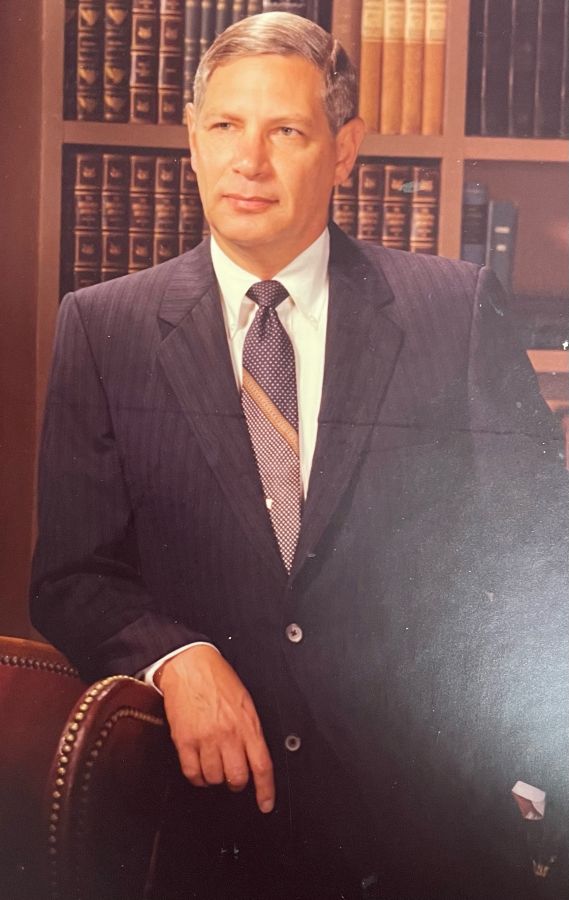 Born January 8, 1926 to Lucille and Lasker Meyer in Houston, Texas. Died peacefully March 21, 2022. Married 59 years to Beverly G. Meyer who pre-deceased him in 2008, Lasker was a devoted and caring husband . Lasker is predeceased by his sister Molly Meyer. His proudest accomplishments in life was his two daughters, Lynn Meyer Brown and Susan Meyer, and his three granddaughters, Allison Brown, Lauren Sellinger Miller (Darrell Miller), and Lisa Sellinger Hardin (Erik Hardin), all of whom gave their affectionate love and support. In addition to his daughters and granddaughters, Lasker is survived by his great grandchildren Blake Meyer Miller, Emma Miller, Cameron Miller, and Addison Hardin.

After the death of his wife, Lasker reconnected with Renee Spolane who he had known in his youth. Renee and her family made him feel like a member of their family.

Lasker was a 1942 graduate of Lamar High School, then spent the next year and a half at Rice Institute before going on active duty in the navy. His final tour of duty was on the USS Reno, and he was honorably discharged in 1946.

After leaving the Navy he joined his father and several uncles who had purchased five suburban junior departments stores which eventually became ten under the name of Meyer Bros. Inc. He stayed there in various capacity for thirteen years at which point he had obtained the position of Vice President and General Merchandise Manager. In 1958 the stores were sold and he joined Foley's as a buyer in the Boy's and Western departments. In 1961 he was appointed manager of Foley's first branch store, Sharpstown. In 1966 he was promoted the Vice President of Branch store development, and his first task was the departmental layout of the Almeda-Genoa and Northwest Branches. After several years in that position, he returned to the downtown organization as a General Merchandise Manager. In 1975 he became Senior Vice President of the upstairs merchandise divisions, and shortly after added advertising and sales promotion to his responsibility. In 1979 he became President of Foley's.

In 1979, at the request of the management of Federated Department Stores, Foley's parent corporation he became Chairman and CEO of Abraham and Status, Federated's large Brooklyn NY based division. He spent two years there before he returned to Foley's in late 1981 and in January 1983 he became Chairman and CEO of Foley's. He remained in that position until he retired in late 1987. He joined a small group of investors who purchased the Spoetzel Brewery in Shiner, TX. After two years they sold the brewery and he joined Specialty Retailers, Inc of Houston, parent of the newly merged Palais Royal and Beall's stores as a Vice Chairman of Merchandising and Sales Promotion.

Like most Foley executives of that time, Lasker was active in various community organizations. He spent many years in various positions in the United Way, ultimately becoming Chairman of the Board in 1989-1990. He was named United Way Volunteer of the Year in 1991. He was a founding vice-chairman of the Houston Job Training Partnership, served on the board as treasurer of the Harris County Children's Protective Service, board member of the Alley and Wortham Theaters, member of the board of the Houston Chamber of Commerce, 1983-1988, and Founding Director of the Forum Club and member of the board of the First City National Bank.

Lasker is proud to have passed down his love of tennis, the beach, photography, and boating to his children, grandchildren, and great-grandchildren. He was a true patriarch and loved by all. The family would like to thank the many care givers who have helped through the years, Shirley Williams, Pamela Valladares, Will Fuentes, and especially Nora Guillory who has known Lasker for more than 40 years. In lieu of flowers the family requests that donations be made to Doctors without Borders, Houston Hospice, Austin Pets Alive, PAWS Philadelphia, or a Charity of Your Choice.

Plant a tree in memory of Lasker

The attached photos are added to the memorial of Lasker M Meyer to help share their legacy.