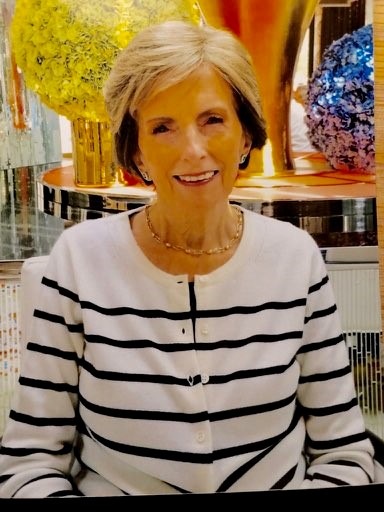 Rosemarie DeVido, 84, passed away on Friday, May 14, 2021. She was born on March 29, 1937, and was one of 10 children, and grew up in Nottwil, a small town in Switzerland. According to local records, she was the first of her family to leave the area since the 1400s. She often told her daughters she was shy, but she never let those feelings deter her from following her dreams, or allow anyone else to stop her from achieving them.

She was a true adventuress. Not speaking any English, she left her native home to work as an au pair for an Orthodox family. While she was in London, she saw a poster that said "Uncle Sam Wants You!" while traveling on the tube. She wanted to move to America, thinking she could eventually work for the tourism industry, and return to live in Switzerland.

While in London, 1965, she moved to Boston where she became an au pair again to another young Orthodox family. Frugal her entire life, as well as always ambitious and eager to learn. Rosemarie saved her money so that she could then attend business school, where she was the only student to score a perfect 100 on the final exam. She worked as a keypunch operator for ACA (Accounting Corporation of America), and she and her friend Anne
enjoyed being in their twenties in Boston in the mid-sixties.

Her life was not without difficulties. In 1966 she discovered her heart valve was scarred from a childhood illness. She had open-heart surgery performed by Dr. Harkin, who invented the heart /lung machine. It is to her credit as both a person and employee, that the owners of ACA, knowing she was alone in Boston brought her home from the surgery to recuperate. Recovering quickly, in 1968 she decided to attend the Mended Hearts Convention held in Puerto Rico. Soon after she arrived, she met the love of her life, David DeVido. A young pharmacist, he was attending the convention and was out for a walk when a woman he had never seen before grabbed his hand, asked him if he were Jewish, and introduced him to Rosemarie and they were together until she passed.

Rosemarie then began another phase of her life, moving to Houston to be with David. Their first daughter, Shana was born in August of 1969. She quickly became pregnant again, with their second daughter Lara. When she was 3 months pregnant, the valve that was repaired was not opening correctly so she needed to have open heart surgery again or she would not be able to carry Lara to term. Miraculously, they both survived and Lara was born to term and healthy in April of 1971. That valve repair was supposed to last 5-10 years lasted until the spring of 2017. While Rosemarie was having surgery, their first daughter Shana stayed with David's wonderful friends, Mr. and Mrs. Steve and Jo King, who have remained kind and loving friends to this day.

While David was busy with the first of many successful businesses, at Key Rexall Pharmacy, Rosemarie joined the sisterhood at Beth Yeshurun in addition to tending to her young daughters and helping David when needed.

When Shana and Lara began elementary school at Beth Yeshurun, in addition to the sisterhood, Rosemarie began learning her 3rd language, Spanish, followed by conversational Hebrew with a private tutor. In 1978, to further her Hebrew Studies she traveled to Natanya, Israel to study at the Ulpan while her daughters attended an Israeli summer camp. She returned and began studies with Cantor Wagner. She deepened her knowledge of both Hebrew and the Shabbat services. She became so knowledgeable she was asked to teach the Men's Club the Shabbat Services.

Rosemarie had a lifelong love of language. Her native tongue was Schweizerdeutch, a Swiss-German dialect. In addition to first learning English, Spanish, and Hebrew, along with a healthy understanding of Yiddish, she then learned Italian. She and David eventually traveled to Italy in their early 60's to immerse themselves in the language.

Rosemarie's daughters were Bat Mitzvah'd at Beth Yeshurun in 1982 and 1984 respectively. Lara attended high school in Switzerland, while their other daughter remained stateside. The culmination of her early Hebrew studies was when she was Bat Mitzvah'd on top of Mount Masada officiated by Rabbi Segal.

In the early years of their marriage, as well as steady throughout the years Rosemarie was David's biggest support. Hard-working, frugal and always having a meal for him no matter how late he came home, she understood that a successful business meant long hours of dedicated work. Once her daughters had begun their young adult lives, she began managing Park Plaza Pharmacy. She worked there for 10 years and proved she wasn't the only DeVido to be reckoned with when it came to running a successful business.

A lifelong lover of travel, Rosemarie and David had many adventures going to different places. Every year, they would go to Switzerland to visit her family, and they would pick a different region in Switzerland to hike and explore. Rosemarie would join David, an inveterate chocoholic, in his search for the perfect Swiss chocolate. Their family and friends were always excited to hear of another trip to Switzerland because they brought back dozens of boxes of chocolates for their loved ones.

Rosemarie loved being of service. She worked for many years in the gift shop at Seven Acres making quick friends with those she worked with among many others. In addition to working at the gift shop, she would visit those patients who had no family visitors, adopting a lucky few. If she knew of anyone who needed help, she would shortly be there, to offer whatever help was needed. She loved helping her daughters and was there for each grandchild, loving both visiting and having the grandkids visit. Rosemarie and David introduced their love of travel to both their daughters and grandchildren, taking all of them on multiple trips and foreign adventures.

In 2017, the repaired heart valve that lasted almost 48 years instead of the 5-10 promised, needed to be replaced. She bravely underwent an incredible third open-heart surgery. Unfortunately, the surgery did not have the hoped-for effects, and she experienced increasing fatigue and developing pulmonary hypotension.

On May 14th, with her husband at her side, having lived an incredibly rich and full life, her heart stopped. She never stopped cherishing life, although she and her family wanted more years, her life was well-lived. She was preceded in death by her parents, Johan and Brigitta Stirnimann; and her siblings, Joseph, Hans, Katherine and Clara; and her nephews Urs and Martin. She is survived by her husband, David DeVido; her daughters, Lara Ramakrishnan and Shana Porcellino; sons-in-law, Kirthi Ramakrishnan and David Porcellino; and her grandchildren, Martin, Leela and Meena. Serving as pallbearers will be, Joel Davis, Kirthi Ramakrishnan, David Porcellino and Martin DeVido.

Friends and family can view the service via live stream on Wednesday, May 19, 2021, at 2:00 PM by visiting the following link: https://venue.streamspot.com/f8d04b5b

To plant a beautiful memorial tree in memory of Rosemarie DeVido, please visit our Tribute Store

Plant a tree in memory of Rosemarie

Plant a Tree
0 trees planted in memory of Rosemarie DeVido

All my memories of Rosemarie are of a warm and caring person. The world needs more people like Rosemarie. Our love to David and the family.
Don Barnett
Walt Kellam

Dear David,
I was saddened to read of the passing of your wonderful wife, Rosemarie. Just a few days ago when we met for breakfast, you told our group of her being in the hospital and that you were leaving for the hospital to join her when the group left. You had many wonderful years with her and you spent many happy days with her and with her family in Switzerland. Please accept my deepest sympathy.
Gunter Frankel

The attached photos are added to the memorial of Rosemarie DeVido to help share their legacy.

Please help memorize Rosemarie DeVido by recording your attendance below.