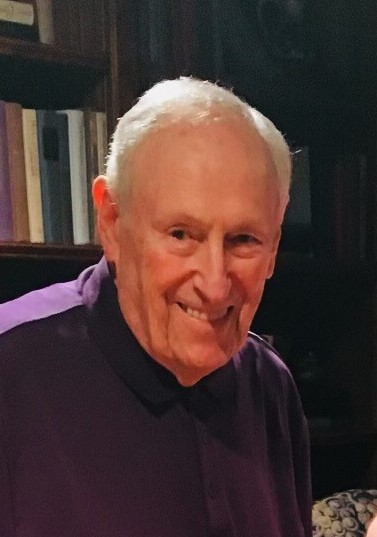 Hilford Joseph Chesnick, Sr. was born in Victoria, Texas on June 30, 1925 and peacefully passed away in Houston, Texas on April 16, 2021. He was predeceased by his loving parents, Dora Rothenberg Chesnick and Edward Chesnick and his sister Sally Chesnick Leon.

Joe enjoyed a wonderful childhood in Victoria and graduated from Patti Welder High School in 1942, earning his varsity letters in both football and basketball for the Stingarees. He enrolled at The University of Texas at Austin at the age of 17 and pledged Tau Delta Phi fraternity. Joe also joined the University of Texas Naval Reserve Officers Training Corps (ROTC) program his freshman year. It was during his sophomore year that he met his future wife, Joyce Bailes, from Houston, Texas.

On February 28, 1945, just a day after being commissioned as a Naval Officer, he and Joyce were married in Houston, Texas officiated by Rabbi Henry Barnston of Congregation Beth Israel. They have been devoted members of the temple for more than 73 years.

After a short honeymoon in San Francisco, California, Ensign Chesnick traveled to the Pacific Islands to meet his assigned light cruiser, the USS Boise. Joe was the youngest officer on his ship during World War II and received his honorable discharge upon the Boise being decommissioned.

After the war, Joe returned to the University of Texas at Austin to complete his education, where, on January 29, 1947, he earned his Bachelors in Business Administration.

After graduation, Joe and Joyce moved to Victoria, Texas where he started his professional career working along-side his father at Chesnick Furniture Company. In 1948, ready to stake his own path, Joe and Joyce moved to Houston where he established Chesnick Furniture Company in Galena Park, Texas. From there, he transitioned to owning and operating the furniture lease departments at Sage Discount Stores.

Continuing to build on their successes in the retail furniture business, Joe and Joyce opened their first Ethan Allen Design Center on the North Loop in Houston, Texas in 1968. Fifty-three years and three generations of Chesnick Family leadership later, the business has become the largest independent Ethan Allen dealership in North America.

Joe was an avid golfer and belonged to both Westwood and River Bend Country Clubs. He was proud that he and his friends had the opportunity to travel and play at many of the finest courses in both the US and Scotland, including Augusta National.

He was also passionate about the University of Texas and the life-long friends he cultivated. He was a long-standing member of the Longhorn Foundation and supporter of the McCombs School of Business. He was especially proud to serve as Guest Coach in 1968 at the invitation of Darrell Royal. Over the years, Joe attended countless fraternity and ROTC reunions with his former classmates.

Joe was also an excellent card player and will be missed at his multiple weekly poker games. This included the women's only game he was recruited to join with the promise to keep all conversations strictly confidential. He held true to his word.

The family wishes to express their sincere gratitude to our wonderful team of caregivers for their devotion and support. Our heart-felt appreciation to Jessie Gibson, Vivian Melvin, Barbra Anderson, Hilda Dominguez, Brent Mills and Will Fuentes.

A private family service was held in the Proler Chapel at Congregation Beth Israel Memorial Garden officiated by Rabbis David Lyon and Adrienne Scott.
Friends and family are invited to watch the service that was recorded, please click link: https://vimeo.com/540326509

For those wishing to honor Joe's memory, the family requests donations to Congregation Beth Israel (https://www.beth-israel.org/), Houston Hospice (https://www.houstonhospice.org/) or a charity of your choice.

To: Chesnick Family, It was a privilege to Know Joe Sr. for over 50 years! He was a friend and a teacher in my association with Ethan Allen. He left a precedence for all of us to follow. Farooq Kathwari, CEO Ethan Allen

While I didn’t have the honor to know your Dad, he must have been a kind and thoughtful person, because that’s what you are.

Joe was one of the sweetest and nicest gentlemen I've ever known. I was one of the "Ladies Only Poker Game" where Joe was a Thurs. morning player for many years. He was a always always such a pleasure to be around and often brought photos of has grandchildren and great grandchildren to the game for all of us to see. I will miss his smile and good nature and I know all the women from the game and his family will miss him terribly.
I'm sure you'll find a good poker game for eternity, Joe.

The attached photos are added to the memorial of Hilford Joseph Chesnick Sr. to help share their legacy.