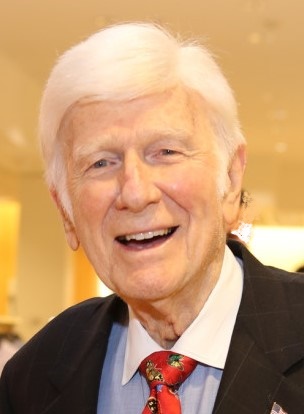 Bill leaves quite a legacy, being a devoted husband, father, business leader, mentor, and author. Although he was driven to achieve business success, he might be remembered the best by folks whom he mentored, in business, and in life. A book he authored entitled "Lessons for a Life Well Lived," displayed his passion for teaching others the importance of steadfastly embracing the ideals of honesty, integrity, and trust.

Bill's life was sprinkled with hard-fought battles as well as adventure. He came from a large family, being the youngest of 5 children with four older sisters. During WWII, Bill enlisted into the United States Army Air Corps from his hometown of Brooklyn, NY when he was 17 years old. During flight school, he distinguished himself and became the leader of 5,000 other cadets.

After the war, Bill moved to Houston, Texas in 1950, where he had a date with destiny. There he met Joan and together they built a family, a thriving business, and traveled the world with a taste for adventure.

Shortly after his arrival in Houston, he began a 35-year journey of building a 1-man business into a respected industry leader before selling it to a Fortune 500 company. Known as an innovator and business leader, Bill served as President of the National Pest Management Association (NPMA) in 1971 and entered the industry's Hall of Fame in 2006. His larger-than-life personality was often showcased in his regular appearances on local TV and radio shows. If Bill joined a professional organization, he was determined to become president of it--driven by a purpose to help others succeed.

Bill was a gifted teacher and mentor. He became the first adjunct professor at the University of Houston's Hilton School for Hotel Management and was later tapped to teach future business leaders by the Wolff Center for Entrepreneurship at U of H. Bill mentored seasoned business executives and novices alike for over 30 years and was President of Silver Fox Advisors.

Bill was tightly connected to the Jewish community of Houston. He served as President of Congregation Emanu El from 1969 to 1971 and has been actively involved as a Past President since then. One of his most treasured accomplishments was overseeing a search process that led to Rabbi Roy Walter's installation at Temple Emanu El. Rabbi Walter went on to become Senior Rabbi and served for more than 40 years. He was also a generous supporter of various charities and community organizations.

Bill and Joan cherished one another, and they had a fairytale marriage for nearly 60 years. Above all else, Bill considered asking Joan for her hand in marriage as the most important decision in his long and healthy life. As the patriarch of a large extended family, Bill taught his family the virtues of integrity, hard work, loyalty, giving to others and the supreme importance of family.

Bill is survived by his four sons and their wives Clay and Ronna, Lee and Jill, Nelson and Tracey and Jon and Julie and his 9 grandchildren and 6 great-grandchildren.

In lieu of flowers, the family wishes memorial contributions be made to the Bill & Joan Spitz Presidential Leadership Fund at Congregation Emanu El in Houston, Texas. Click here to donate https://www.emanuelhouston.org/payment.php

So sorry for the loss of our friend Bill Spitz. He was an amazing man who built a business that so many of us in the pest management industry looked up to. Bill had an incredible personality that seemed to just draw people to him and his willingness to share and mentor were legendary. My prayers are with his beautiful family.

The services for William have not yet been added. Please sign up below to be notified when the services are ready.

The attached photos are added to the memorial of William J. Spitz to help share their legacy.

Thank you for sharing your memory of William