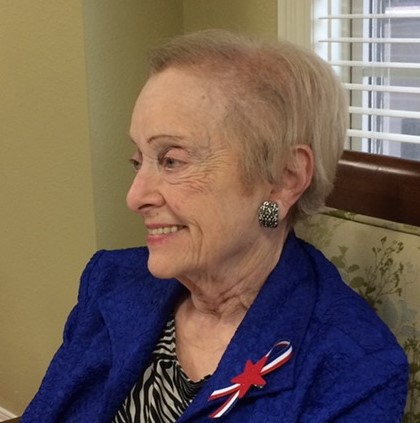 Helen Frances Brenner Mintz took her last breaths at home with family by her side on Monday, February 15, 2021. Helen was born in Kansas City, Missouri on March 19, 1927 to Sarah and John Brenner.

As a teenager, she played piano at a local USO and met a handsome Army trainee from Texas, Aaron Mintz. Aaron courted Helen until she completed high school and college and then brought her to Texas in 1947 as his wife. Helen was by her husband's side as he completed medical school in Galveston, postgraduate medical training in Iowa, and Army service in California. They eventually settled in Houston, where Helen was a beloved art teacher for over 50 years at the Jewish Community Center, as well as Seven Acres and B'nai B'rith Towers.

Helen's beauty, impeccable manners, keen intellect, diplomatic personality, generosity, skill at cooking and baking, and artistic talents were among the many wonderful qualities that made her popular and much-admired by everyone from toddlers to seniors. She was an avid patron of the visual and performing arts and a generous donor to charitable organizations. Helen and Aaron Mintz divorced in 1988, and she eventually met Aaron Marks, who was her cherished companion for over 20 years until his death in 2014. Helen had no siblings and also treasured her very close friendship of 50+ years with Rita Holland.

A private graveside service will be held. The family is grateful to Joyce Montgomery for her loving care during Helen's final years. In lieu of flowers or other gifts, please make a donation to any Dementia organization of your choice.

The services for Helen have not yet been added. Please sign up below to be notified when the services are ready.

The attached photos are added to the memorial of Helen Frances Mintz to help share their legacy.

Thank you for sharing your memory of Helen