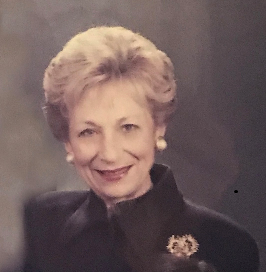 Helen was born in Chattanooga, TN in 1930 and was raised by her parents Louis and Rose Witten in Jacksonville, FL. She grew up as part of a large family in Jacksonville along with her younger sister Harriet Witten Seldes and younger brother Edward Witten, many cousins, aunts and uncles. She attended college at the University of Alabama and the University of Tennessee before moving to Houston in the early 1950's. In Houston she met the love of her life - Herman Berger, and they married in 1954. They enjoyed 51 years of marriage before Herman's passing in 2005. Helen and Herman devoted their lives to raising a son and a daughter in Houston and sharing many happy adventures together.

Helen was a very strong woman who herself was blessed with strong opinions which she freely expressed. She was a voracious reader and she loved to travel with Herman. Helen was passionate about her family, her devotion to Judaism and to her synagogue. She was very active in the Sisterhood and was charitable to the synagogue and the causes she believed in. Most of all she valued and loved her family and was fortunate enough to enjoy her children, grandchildren, great-grandchildren, nieces and nephews.

Helen is remembered lovingly by her children Mark Berger and Terri Ballantyne, her daughter-in-law Katia, her son-in-law Dana, grandchildren Stefanie, David, Jared, and Steve and many other family and friends who will cherish her memory. Helen was preceded in death by her parents, her husband Herman, and her brother Edward.

A private funeral was held at Beth Yeshurun Post Oak Cemetery on Friday, September 4, 2020. Contributions in her memory may be made to Beth Yeshurun Synagogue or a charity of your choice.

The services for Helen have not yet been added. Please sign up below to be notified when the services are ready.

The attached photos are added to the memorial of Helen Frances Berger to help share their legacy.

Thank you for sharing your memory of Helen