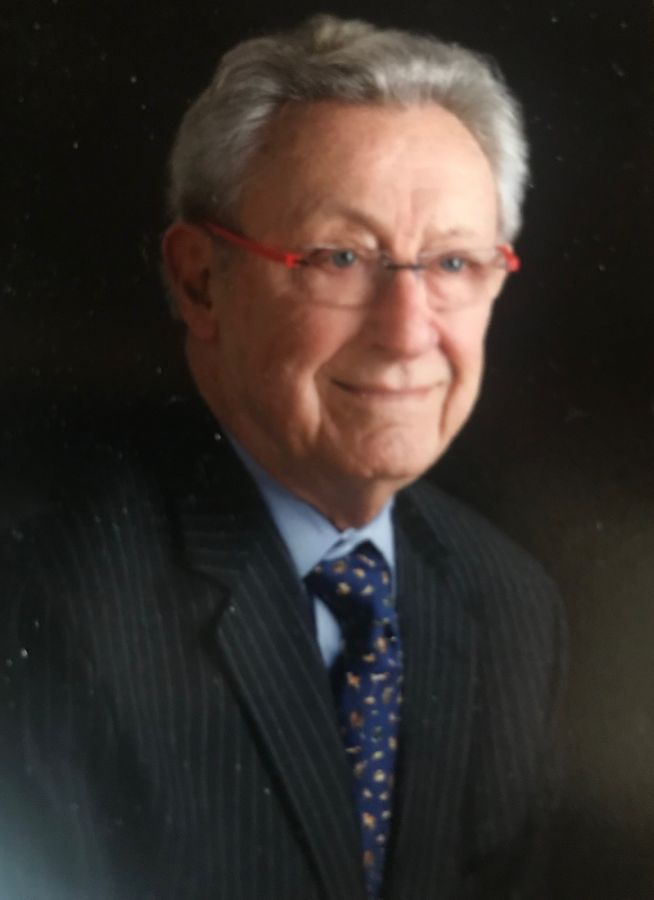 He was born in Louisville, Kentucky and spent a very happy childhood building model planes, collecting coins and war memorabilia, playing golf and learning to fix practically anything in Evansville, Indiana, the beloved only child of Jack and Geraldine Levin Friedman. After attending the 1945 AMA convention on Navy Pier in Chicago with his physician uncle, he decided then and there that he wanted to be a doctor and not "stand around" waiting for customers in his parents' jewelry store, which had been named for him. He attended Indiana University in Bloomington and applied to the IU Medical School as a junior where, to his surprise, he was accepted without an undergraduate degree. He obtained his MD in 1956 and was awarded a retroactive BA.

The first year of the medical-residency computer match brought Jim to Houston to train as an obstetrician/gynecologist at Baylor College of Medicine. He loved the field for its combination of surgery and long-term relationships with patients. He wanted to train at a large public hospital and visited Houston on a spontaneous side trip while interviewing at Charity Hospital in New Orleans. Because he was so close to Texas and had never been to the state, he drove over and was able to attend the rodeo at old Sam Houston Coliseum downtown, where he would see his daughter graduate from high school exactly 20 years later. He lived in Houston and away from cold winters for the next 64 years.

Here, he met his late wife, native Houstonian Marlene Becker, to whom he was happily married for 43 years until her death and with whom he had his three children who survive him along with their spouses and children: Leslie Kaufman (Mark), Jeffrey Friedman MD (Lauren), and Andrew Friedman (David), to whom he was an attentive and patient father, and grandchildren, Michael Kaufman (Megan), Matthew Kaufman MD, Benjamin Kaufman (Oriana), Miller Friedman, Megan Friedman, Emma Friedman and Buddy Friedman. He was also a proud great grandfather to Ellie and Sarah Kaufman. For his older grandchildren, Papoo's garage workshop was a much-loved place where many hours were spent learning and having fun. He could not have been more delighted that his son Jeff and grandson Matthew followed him into medicine.

He and Joyce Weaver Aguilar, RN whom he long knew from the Texas Medical Center reconnected after each lost their spouse within two weeks of the other and they married in 2001 after Jim proposed at the Eiffel Tower. He became an involved stepfather and grandfather to her children and grandchildren, Marcy Hill (Mike) and Emily Capps (Allen), Pearson Hill, Ava Hill, Carter Capps and Amelia Capps. Joyce and her family were tremendous sources of companionship and comfort to him both in health and illness.

Jim is also survived by his brother-in-law and dear friend of over six decades, Allen J. Becker. His other in-laws Ada Mae and Walter J Wolf MD, and Shirley Becker predeceased him. The Beckers, Wolfs and Friedmans were as close as siblings while raising their children and he was a devoted uncle to his nieces and nephews: Brian Becker (Norelle), Susan McCauley (the late Bill), Gary Becker (Amy), Lisa Spier (Greg), Steven Wolf (Sandi) and Sunni Markowitz (Gary).

He was grateful, as is his family, for the exceptional and compassionate care he received at The Methodist Hospital, particularly, the dedicated nurses and personnel in Walter 21 as well as his physicians Albert Raizner, Juan Olivero, Sr., Juan Olivero, Jr., Sachin Patel, Richard Goldfarb and those in the division of vascular surgery. At home, Tracey Moore was a deeply appreciated caregiver.

A highlight of his professional career in addition to delivering thousands of babies and taking care of their mothers was the two years he was President of the Medical Staff of The Methodist Hospital where he established many rewarding collegial relationships. Prior to going into private practice, he volunteered for the United States Air Force and and spent two years as a Captain stationed at the now defunct James Connally Air Force base in Waco, Texas. He considered the years in military service among the most professionally and personally fulfilling in a long life full of achievement and care for others.

In light of the health emergency, services and burial will be private. The family looks forward to a future memorial service where his life will be celebrated. Remembrances to The Empty Shelter Project, cofounded by his grandson Miller Friedman with whom he shared his love of dogs at www.k-9angel.org.

Add a photo
Family will be having a private graveside.
Directions  Add to Calendar

The attached photos are added to the memorial of Dr. James A. Friedman to help share their legacy.

Please help memorize Dr. James A. Friedman by recording your attendance below.

Thank you for sharing your memory of Dr. James

Help friends and acquaintances of Dr. James leave memories by sharing to Facebook