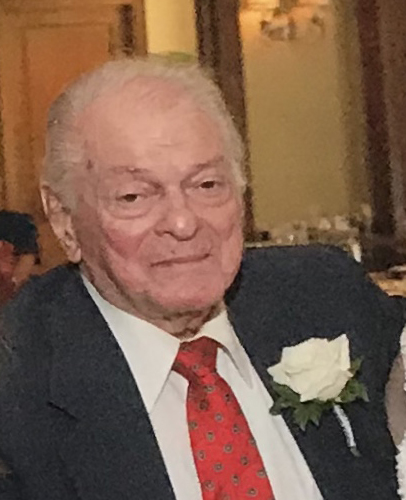 Louis Harry Green, M.D., died on May 21,2020, in his native city of Houston, Texas. Born on January 21-, 1923 to Eva and Harry Green, he lived an extraordinary life full of accomplishment and leadership and graced with charm and warmth for others.
A graduate of San Jacinto High School, Louis continued to write a column in the class newsletter well into his nineties. He returned to Houston from the University of Texas to care for his widowed mother. He enrolled in the University of Houston where he has been honored as distinguished alumnus of The University of Houston Class of '43. He was alumni president and a devoted supporter of his beloved Cougars.
Louis graduated medical school from the University of Texas Medical Branch in Galveston. During that time he served in the U.S. Navy and Air Force through World War ll. Following an internship in Washington,D.C., he became Dr. Michael DeBakey's first resident in surgery. They operated at Jeff Davis and the VA Hospital before heart surgery became a recognized specialty. He enjoyed a long and distinguished career as a general surgeon and served many years as a clinical professor of surgery with Baylor College of Medicine and later with the VA.
His life was blessed with considerable talents as a fine pianist. He enjoyed playing with Dr. Denton Cooley in The HeartBeats, the first "doctor band". Until recently, he entertained his fellow residents with a piano concert each month at Brookdale. He was a fine golfer, competitive tennis player, world traveler and student of history, art, religion and anything else he could lecture on throughout his life.
But if asked, he was most proud of his family. Louis is predeceased by his two brothers Sam and Leon. He was quick to say that he was lucky in love twice. Minnie Stepinoff Green was most definitely the love of his life for more than 40 years. She and Louis had three children including Shelley Green, Chuck Green (Pat), and Lauren Smith (Robert). Louis had three grandchildren including Geoffrey Smalling (Alissa), Elizabeth Shulak (Michael), and Mindy Green. He loved visiting with and seeing videos of his two great grandchildren, Rowan and Landyn Smalling (Geoff and Alissa).
Amazingly, in his early seventies, he married Barbara Schachtel, a personal friend for 50 years. They shared a wonderful second marriage of more than 20 years full of mutual interests in their synagogue, in their hospital affiliations, and in their love of music.
Louis had a close relationship with numerous nieces and nephews in Houston and throughout the country. He enjoyed the special attention of his nephew Harry Green.
His final years at Brookdale were a blessing. He had and made many friends at the community and claimed he had operated on just about every one of them. The family will always remain grateful to the amazing staff and compassionate care of the angels at Brookdale.
A private burial will be officiated by Rabbi Roy Walter who was considered a friend and twenty year tennis partner in addition to being his Rabbi.

Wonderful memories!! Super smile on his face whenever I would see him. Marian Bell

The attached photos are added to the memorial of Louis H. Green to help share their legacy.

Thank you for sharing your memory of Louis