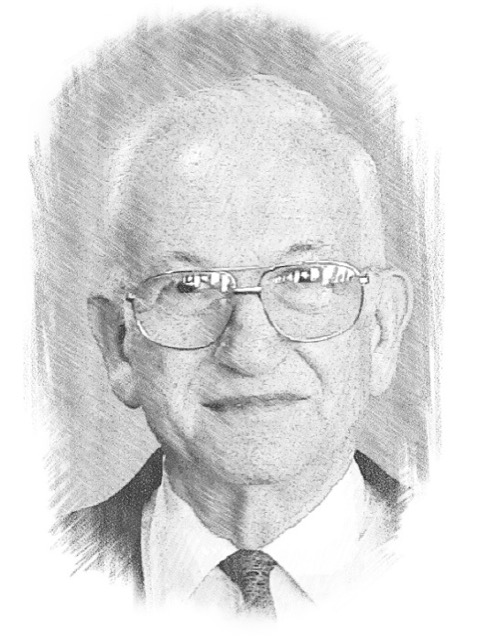 Aubrey Meyer Farb was the epitome of the Greatest Generation whose calling cards were: love of family, scholarly education, Judaism and tzedakah (charity and justice), hard work and the highest degree of ethics and excellence. Born in Galveston, Texas on September 26, 1922, the first-born son of Sophia Meyer Farb and Jacob L. Farb, he was a brilliant student who graduated from Houston's San Jacinto High School at age 16, was accepted to Rice Institute to study liberal arts when there was no tuition (the only way his family could afford to send him to college) and earned his bachelor's degree at the age of 19. The stellar graduate (Class of '42), elected to the prestigious Phi Beta Kappa honor society as a junior, was selected for the Navy Japanese Language School at the University of Colorado and was commissioned in WWII as a Japanese language officer stationed at Guam and Iwo Jima, proudly serving his country.

In July 1947, Aubrey met Sylvia Lensky on a blind date to play bridge. They were married May 26, 1948 and celebrated 71-1/2 years of marriage. Aubrey, who earned a Masters Degree in Accounting from Columbia University, founded the Farb, Miller & Beerman accounting firm in Houston, taught accounting at both the University of Houston and Rice University, served as a director of the Texas Society of Certified Public Accountants and a vice president of its Houston chapter, plus wrote and lectured within the CPA profession and in the business community, at the local, state and national levels. A world traveler with Sylvia, he took early retirement after selling his accounting firm to Alexander Grant. He founded Joske's Travel on Post Oak, as well as Woodlake Travel, in addition to being a real estate developer, investor in the financial markets and entrepreneur.

The long-time Houstonian applied his business acumen to invest his time, talents and resources to support many local causes, serving on the Houston boards of Planned Parenthood, Family Service Center, YWCA, San Jacinto Girl Scouts, Child Builders, Houston Symphony, Boys & Girls Clubs, Congregation Emanu El, and Phi Beta Kappa (PBK) Alumni Association and the Houston Chapter's college scholarship program to which he was highly committed and served as national chairman of the PBK Alumni Association for six years. His proudest legacy, in addition to Sylvia, their four daughters, three sons-by-choice, six grandchildren and two great grandchildren, was the establishment of the Aubrey & Sylvia Farb Community Service Fund at Congregation Emanu El in 1984 to provide seed money for newly founded charities in Greater Houston. His and Rabbi Roy Walter's joint vision would be to provide a jump-start to organizations and programs that had no broad base of financial support, thus furthering the congregation's fulfillment of the Jewish commandment of tzedakah (justice.) In so doing, the Farb Fund, over the past 35-plus years, has been a magnanimous and trans formative force in the Houston community, helping lay the foundation to hundreds of non-profits and grass-root programs and touching tens of thousands of lives.

Aubrey's philanthropic reach also included the Houston Symphony with the Sophia M. and Jacob L. Farb School Bell Award for Music Educator and college scholarships for the Shepherd School of Music and Phi Beta Kappa at Rice University and Memorial High School and supporting the establishment of Rice University's Jewish Studies program. Among his many other achievements, Aubrey was awarded the Bronze Life Masters of Bridge and Foley's Savvy Award.

Aubrey's caregivers for the last three years, Gilberto Sanchez, Gloria Miranda and Kathy Ballard, helped him lead a cherished life of continued independence and dignity. Their loving and caring service, respect and friendship was a life treasure for Aubrey and Sylvia. In fact Gilberto rescued them during the floods of Hurricane Harvey and ushered them to safety.

There will be a Memorial Service for Aubrey at Congregation Emanu El,1500 Sunset Boulevard, Houston, TX 77005 on Wednesday, January 22, 2020 at 1:30 p.m. Shiva Prayers will be held on Wednesday evening, January 22, 2020 and on Thursday evening, January 23, 2020 at 5:30 p.m. at the Morris home. For those unable to attend the memorial service, Congregation Emanu El will "live" stream the service at this link: https://venue.streamspot.com/event/MjEzNTAxNQ==

To honor Aubrey's memory, donations may be made in his name to the Farb Fund, either online or by sending a check to the: Aubrey & Sylvia Farb Community Service Fund, c/o Congregation Emanu El, 1500 Sunset Boulevard, Houston, TX 77005. Or go to www.emanuelhouston.org - "Human Services," click on "Give A Gift" and scroll down to this Fund.

The services for Aubrey have not yet been added. Please sign up below to be notified when the services are ready.

The attached photos are added to the memorial of Aubrey Meyer Farb to help share their legacy.

Thank you for sharing your memory of Aubrey